Skip to content
This is Jim Hadley‘s collection of Hadley Coats of Arms. Here’s part of Jim’s message he sent with these:

According to some notes made by Chalmers Hadley in preparation for some of his books almost a hundred years ago, he states that some of these English arms carried a motto “Deo auxilium mihi est”. I’m not a Latin expert but I believe this means “God is my Help”. A few of the Irish Hadley arms carried the motto of “victorious fidelity in authority”. He also states that the Hadley arms were entered in the notebook of one Sir Richard Carney, Ulster King of Arms, from 1683 to 1692 and were of the Hadley family of Somerset and Ireland. At that time they had been used in Ireland considerably for over a century for identification, seals, etc.

The only problem with these shields is that other than George Hadley (b-1625) I have not been able to identify any specific individual with any one shield. Maybe some other members of the family can add information that I have been unable to locate. Interesting, Huh. Any feedback. Send it my way. Always glad to reply. 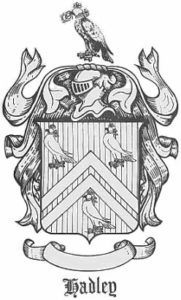 An early edition of Burke states that this coat of arms was recorded in both England and Ireland. The possibility exists that whichever Hadley belongs to this shield is the one that transplanted the family into Ireland. Alas, if we only knew what that name was.